1853 Feb – Multiculturalism on the goldfields

In the 1850’s every adult person on the goldfields, whether a miner, storekeeper etc. needed to be licensed. There are several newspaper articles relating to the period when the government doubled the license fee for non-British citizens. The impost of the licence imposed quite a burden to those first arriving on the fields or those unsuccessful in their search for gold. Because of this the miners had sympathy for the European miner’s situation although most lacked any kind of empathy with the Chinese. Some persons showed no sympathy for either –  not only did they want to see the Chinese but also the Americans and the French and any other foreigner removed. This would then leave the Englishman exposed to ‘less temptation’ according to one caustic  gentleman who sent the following to the Sydney Morning Herald:

To the Editors of the Sydney Morning Herald.

GENTLEMEN, The fable of the monkey, cat, and chestnuts, has passed into a proverb, and we gather from that historical sketch that in those days, as now, a monkey proxy was not readily obtained when all the risk was on one side, and all the profit on the other. It has been reserved for the superior advancement of the Dirt Hole and Devil’s Gully retailers of pigtail and dips to triumph on the received axiom of mankind—to induce the hard working diggers to make common cause with idlers, and risk their character and liberty in a silly squabble with the Executive—to establish a sixth point in our Australian charter which the residents of Westminster and the free traders of Manchester have never dreamt of.

Indeed, it is only at the antipodes of common sense that simple men could be so deluded. The Essex farmers do not quarrel with an impost on foreign corn. The Spitalfields weavers have acquiesced in a duty on Lyons and India silks, the London distillers have not petitioned the Chancellor of the Exchequer to take off the taxes on rum and brandy; but so happy is this land we live in,—so chivalrous the diggers,—so persuasive, the orators of this Dirt Hole,—that we are threatened with a civil war, fire and sword, a harvest for crimes and hangmen, because a very indifferent lot of Chinese, who have bolted from their masters, and a few erring adventurers from the American States or the French empire, are to be encouraged by a double licence fee to complete their contracts and face their creditors at home.

Will any ingenuous digger be so good as to state his condition and prospects, and the rate at which he values his life and the fame and character of his country, and by what process of calculation his personal injury in this matter would justify this risk of his own life, or the happiness and lives of his fellow-citizens. No doubt, by discouraging idlers this sort of error is diminished, by discouraging foreigners whose countries we have no desire to imitate, and from whom Englishmen can learn but little to their advantage, the crowd on the gold fields may be a little thinned, and so the revenue may suffer a little and our own countrymen be exposed to less temptation; but surely this is not exactly a ground for rebellion, even if the law be impolitic, as perhaps it may be: the wrong may be redressed, in the usual manner; the law may be improved. If England could wait for the Reform Bill, and for relief from the Corn Laws;—if the Catholics could wait for their emancipation; and if we do not desire to bring about a Gallic despotism by popular madness, our diggers may wait till the next session of Council, when a Bill to relieve those much oppressed Celestial and other foreigners may be passed. 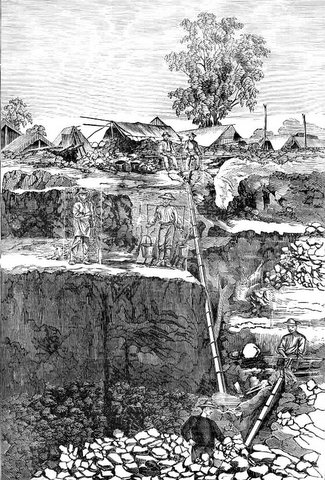 Chinese at work on the goldfields

A very large proportion of all the most valuable property in the colony is daily passing into the hands of those industrious and prudent working men who have done well at the mines. The deposits in the Savings’ Bank and other banks show that in this colony alone of all the possessions of the British Empire, the rewards of bodily labour have exceeded those attained by the efforts of education and mental attainments. Of all the labouring men in New South Wales how few there are who might not in the last two years have placed themselves above the reach of poverty. And how many there are who, possessing property, have a stake in the well-being and quietness of the colony. And who are they who for this point of Chinese precedence would stir up the diggers to shed blood, to commit murder? Which of these agitators has anything to lose, either character or property? I cannot believe that these monkeys will find cats’ paws; but they may burn their own fingers.