In 1951, along with the rest of Australia, Hill End celebrated the 50th Anniversary of the founding of the Commonwealth of Australia as a Jubilee Year.

The big event in the town was the Gold Centenary Celebrations. The following photos and captions come from personal collections of Mrs Nell Anderson, provided by Robert Anderson, and Mrs Helen Wood. A newspaper report from the Western Times of 22nd Oct 1951 describes the event. Click on the photos to enlarge them in a new window.

Favoured by brilliant sunshine, the Hill End Jubilee and Gold Centenary Celebrations on Saturday attracted the largest crowd to visit the town for many years.

Saturday’s events were the climax to a week’s programme, which celebrated the discovery of gold and the jubilee year. The celebrations concluded yesterday with a rifle shoot and church services.

About 500 people viewed Saturday’s events which included the re-enactment of the finding of the Beyers and Holtermann nugget which was discovered in 1872.

People travelled from Bathurst, Mudgee and all the surrounding towns and the celebrations were officially opened by the State Minister for Mines (Mr J. G. Arthur).

During the week a number of events had been held to celebrate the Commonwealth jubilee year. 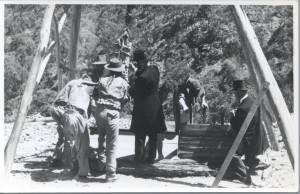 Re-enactment of raising the nugget 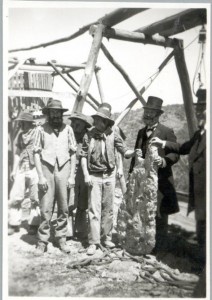 Re-enactment of raising the nugget

On Saturday morning about 300 people saw Beyers (Angus Longmore) and Holtermann (Edgar Hocking) haul a large “nugget” from an old shaft less than a quarter of a mile from the original site.

The “nugget” was brought to the top of the shaft by a whim, drawn by a horse. When it came to the top the crowd cheered wildly. It was then put on a cart and taken to head the procession through the streets. 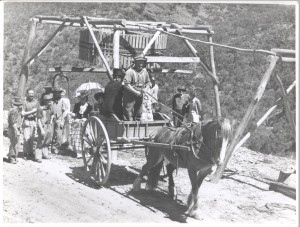 Taking the nugget to town

(The “nugget” was made as an exact replica of the original by Mr Bruce Goodwin a member of the celebrations committee). 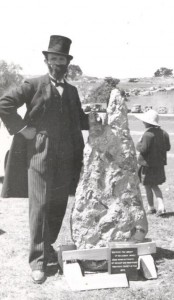 The procession left the sportsground and proceeded through the streets.

On the first cart were Beyers and Holtermann with their “nugget” and miners dressed in costumes of the period of the finding.

They were followed by children dressed in costumes of the 1851 era with a local girl riding side-saddle in oldtime garments. 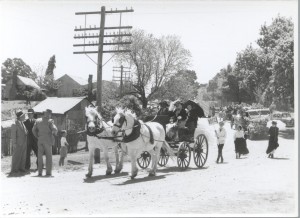 Next came an old coach, constructed in 1866 and owned by Mr H. Rothery, of Mandurama. Two men and two women dressed in clothes of the day graced the beautiful old coach.

Children dressed in 1872 costumes preceded a lorry which carried the queens from the crowning ceremony of the night before. They had raised money for the celebrations fund. 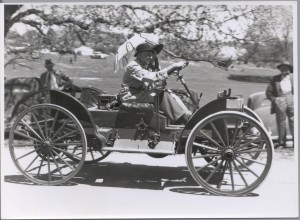 A 1901 model car with men and women dressed to suit the occasion followed, with a penny-farthing bicycle next. Children in costumes worn at the turn of the century came after this. 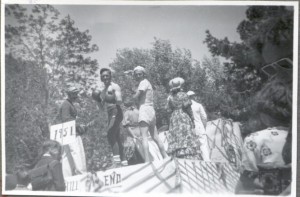 A number of young people from Hill End followed. They were clothed in all types of costumes to show off what the “Younger Set of 1901” wore. They included a man’s bathing costume, cricket attire, and women’s fashions.

Children dressed in 1951 clothes preceded a float which bore the sign “Holtermann’s Life Preserving Drops”,which the seller guaranteed, would cure “headache, heartache, or any other ache”. 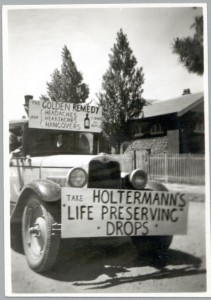 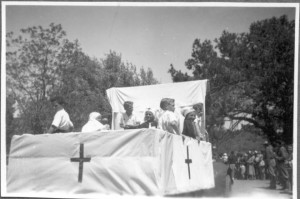 The Red Cross float was crowded with children, dressed as nurses and stretcher bearers.

Frank Hocking with mine model

Then followed a miniature mine – a true scale model of mining gear. It was made by Mr Frank Hocking, of Hill End.

The procession returned to the sportsground where the gatekeepers were dressed in old mining clothes as were the “police officers” on duty throughout the town.

Many others dressed for the procession, and some even wore sidelevers and whiskers.

Immediately after lunch, the air pageant was staged, by three aircraft from the Orange Aero Club.

The aircraft, two Tiger Moths and a Ryan, gave a series of loops and rolls as well as formation flying. They flew low several times before leaving for Orange.

The Ryan was piloted by Mr W. Taylor, senior instructor of the western circuit from Newcastle Aero Club. The pageant was described by Mr Vince Suttor a member of Triamble Aero Club. 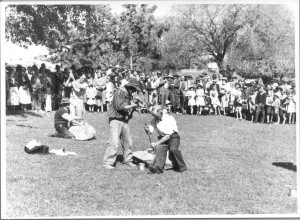 Then followed the rock drilling exhibition.

Four teams, each of two men gave an excellent display of drilling operations with pick and hammer.

The winners were William Byrne and A. Haker, with Herbert Woolard and Les Woolard second.

Other events on the programme included a rifle shoot, a gold washing competition,a gold specimen race and a polo match between teams from Mudgee, all of which were well attended. 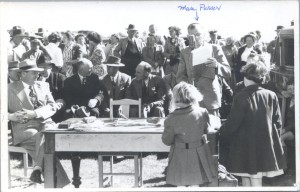 Mr Robert Lincoln president of the committee,
welcomed the visitors to the celebrations and thanked them for their attendance.

The success of the week’s events had been due to the hard work of the committee and helpers, he said.

He said it was a historic day for Hill End. It was 70 years ago to the day that the nugget was wheeled into the town.

Since that time mining had been carried on almost continuously.