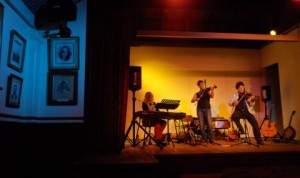 The ancestors keep a close eye on the performers…

Cath Ovenden presented a concert of  of Joe Yates material in the Royal Hall in Hill End on Tuesday 2nd April 2013 . “It was a wonderful opportunity to be able to perform the music in the very place where  Joe played all those years ago” she commented. The new CD, the “Fiddle Music of Joe Yates” was launched at the National Folk Festival in Canberra at Easter. We have a limited number of these CDs for sale so Contact us for details. It retails for $25 which includes postage within Australia. 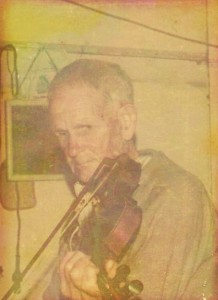 Joe Yates with his violin – from Coral Brann’s collection

Joe Yates was a bush worker and well known poet and musician from the Sofala/Hill End area. He was renown for playing his wonderful melodies, many of which had spanned three generations of the Yates family, at the colonial dances. His stories and music have been included in traditional Australian folk music collections and are preserved in the oral history and folklore collection at the National Library of Australia.

George Jnr and Emma arrived in Hill End during the gold rush and stayed in the area where they produced their own “band” of  six boys and four girls, most of whom play musical instruments. Joe’s memory for music was incredible and well into his twilight years he was able to put tunes together and play with vitality.  He was also well known for his poetry and his dedication to the living bush. Joe passed away in 1987 but his contribution to Australian culture, history and the arts will live on.

Mike Martin, in his “Collected tunes from Joe Yates” has reproduced a number of his works and these have been recorded by the group Jindi. The following are some of these tunes which have been included in our webpage with the kind permission of Mike Martin.

08 All the blue bonnets are over the border

To purchase an MP3 download of the entire Jindi Plays Joe CD and listen to other works by Joe which have been recorded by Jason & Chloe Roweth  check out their website. Joe’s music is also included on their Battlers’ Ballads DVD .