Introduction – a guide to the mining records

The State Records have compiled a Gold Mining Guide which may assist you in locating material about your mining ancestor.

The Department of Industry Resources and Energy have established a database of mining information, maps, reports and general information from their records. The DIGS database is keyword searchable and is the easiest way to locate a large selection of material which may be relevant to your search. 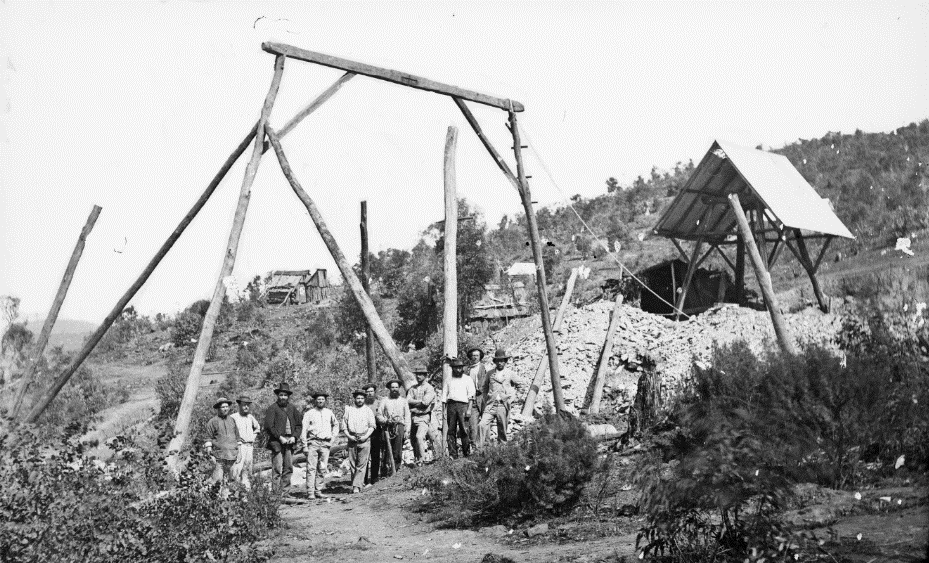 Erecting a whim to provide horsepower to the shaft of a mine head, Hill End
ON 4 Box 7 No 18729 (State Library of NSW)

For a general overview of the early geological history of the area and many of the mines, the most detailed reference is the NSW Geological survey publication, “Mineral Resources 27, The Hill End & Tambaroora Goldfield” by Leslie Frank Harper, published in 1918. The whole volume can now be downloaded and is available online on the DIGS database.

Only a small number of mining records relating specifically to the Hill End & Tambaroora goldfields appear to have survived. Copies of some of these, held in private collections, have been transcribed by HEATGG volunteers and every effort has been made to ensure correctness however the challenges of dealing with photocopies of very old records, often when parts of the pages were also missing in the originals, may have led to some inaccuracies. Familiarity of names to those transcribing the records has led to some corrections.

Further records will be added to this collection as resources permit.

Use your browsers “search” facility to look for particular names. It is also suggested that you browse the entire listing as you may recognize spellings not known to the transcribers.  Because of the number of names involved it has not been possible to verify names against other sources – just not enough hours in the day!

The government was responsible for the safe delivery of the gold from the fields to the city. It was a long journey for its time and on the way it had to avoid being intercepted by ex-convicts, confidence men, sly-groggers and bushrangers. They established a weekly gold escort from all the principal gold diggings and the chief towns of Bathurst, to Sydney. This consisted of a light but strong spring cart, guarded by armed constables and attended by mounted troopers. Additional police were also appointed to all the principal stations. This was done at a heavy cost, because many of the old police resigned their situations and rushed to the diggings! Very high wages had subsequently to be given to all the men employed in this role.

Stories were told of diggers who did not trust their gold to the escorts, or who were not prepared to pay the fees asked to have it taken to Sydney. Instead, they would transport the gold themselves, but would travel within sight of the escort vehicle, thus gaining the perceived “protection” of the Police and troopers, without having to pay the fee, which was 1% of the value of the gold. Additional police were also appointed to all the principal stations.

This list, compiled by Beatrice Brooks over a number of months, if not years, of trolling through early issues of The Empire newspapers now provides a comprehensive alphabetical listing of those people on the Western Goldfields who were sending their gold to Sydney in this first decade after the initial gold rushes.

Maybe your ancestor is one of them…

Government Gazettes are a unique, useful and extremely fascinating resource for local, family and social historians and researchers in other fields throughout Australia.

In the 1873 issue, on pages 1744 – 1778 there is a compilation of records concerning the Western Goldfields, showing the lease Number, the Applicant and the locality of the lease. It also includes the area of the lease applied for and whether it was alluvial or quartz. This listing is in no particular order that is easy to access, other than by browsing.

This list has been retyped and transcribed by HEATGG volunteer, Russell Dorhauer. It has then been sorted by the lease applicant’s name, providing a valuable reference source for those who are seeking information about their ancestors who may have had a mining lease in the Western Goldfields district during 1872 and 1873.

Now that these Government Gazettes are available on Trove Russell then located further lists of Lease Applications. Links to these individual lists, covering the period 1875 – 1906 have now been compiled into one list and uploaded to this site so that you can check a range of dates to determine if your ancestor was among the names.

As there is no known remaining record of Miners Rights issued, these listings provide a basis on which further investigation may be made. It shows where they had their lease, thus placing them “on the ground” in a particular spot and confirms their connection to the Western Goldfields area at a particular date.

Please note that the spelling of names and localities have been reproduced as they appeared in the Gazette. It is therefore wise to browse various spellings of these names to ensure that you have covered all options.

When companies or individuals wished to erect stamper batteries, crushing machines or other heavy machinery they had to make application. This register shows the date, the applicants’ names and locality, how much land was required and any remarks concerning the application and its approval.  the description of the machinery to be erected and for what purpose.

There is a large gap in the dates from 1876 to 1884 which may indicate that a downturn in the mining boom was becoming evident and equipment was not being installed, or it may just mean that there is another register which has been used.

Register for transfer of a claim or shares in a claim

These registers record the transfers of claims from one miner to another during the peak period in Hill End’s mining boom.  Sometimes they were partial shareholders and so they were able to pass just that portion on to another miner. They are valuable as they present us with the name of the claims or mines that the miners were associated with as well as its location.

It gives the Register number, the date of the transfer, and from and to whom the transfer was made. It provides the portion of the claim and the name and location.

Register of applications for suspension of working conditions 1870 – 1873

This register records situations where the miners sought a temporary exemption from working on their property for a period of time. This happened when, for some reason, the leaseholders were unable to work on their leases but still wished to retain the rights to it.

This register gives the Application number, the date, the applicant’s name, the type of claim, the portion of the claim, the period for which they were requesting the exemption and the reason for the application.

It is interesting to note that the application in the latter part of the register include a number of almost “residential” claims, where there were “Houses and allotments” and “gardens”.

The list of mines and claims in 1872 had been transcribed from 2 maps which have been combined to produce a composite map of the area. It records the names and approximate locations of the claims spread out along the ridge known as Hawkins Hill and the surrounding area.

This composite map has been made up from Leslie Frank Harper’s plan done for the Geological Survey of New South Wales, “Plan of original claims at Hawkins Hill” and a hand drawn map based on one drawn by J. J. Coates and Charles Worth, the “Continuation map shewing [sic] the positions of the principal claims on and south of Hawkins Hill, 1872”. This map was updated at times by members of the Marshall family of Hill End.

Please note: The Plan of claims on Hawkins Hill 1872 map has yet to have the grid lines inserted – in the meantime imagine the map to be divided into 5 equal columns A – E and 21 equal rows 1 – 21)