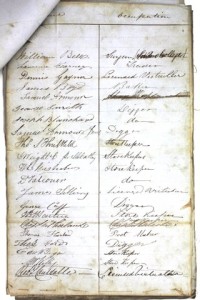 Petitions are one form of expressing the feelings of the masses regarding certain issues, usually of great import to the population. From the very early days the worthy citizens of Hill End, Tambaroora and districts embraced this action when they were not happy about a situation.  The populace was very active in stating their opinions and also in petitioning the government on many causes. These petitions have been preserved in our State and National Archives and provide great insight into the needs of the residents.

If members of the population didn’t come to the attention of officialdom, then there is every chance that any record of their presence in the district may not exist. If they didn’t need to register a birth, death or marriage, or were not eligible to appear in the electoral rolls or didn’t undertake activities which may have brought them to the notice of the press or the courts then they may have slipped through the net.

However, petitions may rectify this situation to a degree and are another valuable resource for the family historian. They provide a list of names, and often include addresses or locations and sometimes occupations. The original documents can also show an example of the petitioner’s signature, whether it be a “thumbnail dipped in tar” or finished off with a well-educated flourish. So much can be determined from a man’s signature. Unfortunately, in most instances it was only the men whose names appeared, as women were not expected to have an opinion in those days.

Gathering Group volunteers have extracted a wide selection of these petitions from the Archives and spent hours painstakingly interpreting the signatures. These are now sorted into alphabetical order for each document. Transcribing this old handwriting is a skill which is fast disappearing and so hopefully these lists may provide some sort of record which can help the researcher. We even had one petition, that of the matter of Bah Fook, where more than 200 signatures are in Chinese script. These have now been transcribed and included, for those researching their Chinese ancestors.

Whilst every attempt has been made to decipher the handwriting correctly in many instances the signatures have proved challenging. If searching for a particular name then it is wise to browse the whole listing as well, in case it has been misinterpreted. We welcome any corrections.

Some of these petitions have been sourced using indexes to the Colonial Secretary’s Papers 1788 – 1900 at State Records. Copies were then made of the items and volunteers worked their way through the names. As they continued to index the lists many of these names appeared in multiple petitions and so became “old friends” for the transcribers.  It also seems that some people were the “movers and shakers” in the district as their names appeared at the start of each petition. In some instances, it was also discovered that some names appeared more than once…a fact not overlooked by a diligent public servant in the Colonial Secretary’s Office who often made a notation of this on the original document. An interesting task when faced with 1700 names and no computerization!

Other petitions, relating to Post Office matters have been sourced from the National Archives of Australia. There are 4 files (available online) for Hill End and 4 for Brumbin Post office that include a number of petitions. There are also files for Tambaroora Post Office however these have not been sighted as they are not available online as yet.

We have included petitions relating to matters in surrounding districts as well, as miners moved around the areas and can appear in more than one district.

We aim to make further petitions available over the next few months so please refer back to this page on a regular basis.

The following transcriptions of petitions, arranged chronologically, are now available for viewing online and within these, petitioners have been arranged in alphabetical order for ease of viewing. You can use the “search” facility on your browser if searching for a particular name. It may also be worthwhile to browse the names as we may have slipped up in transcribing and you may recognize a variation of a family name.

Sometimes interpretation is in the eye of the beholder. If you see a name and feel that we have erred in reading the writing then please contact us with your thoughts on the correct spelling.

Our latest February newsletter is ready for reading. Check out Issue 26 for all the details from our recent Gathering, announcement of upcoming events and lots more. Previous issues of our newsletters are also available here. Click here to read them.