Hill End based artist Rebecca Wilson has deep family roots in the Central West.  She is a descendant of the pioneering couple Pierce and Mary Collitts, of the famous & heritage listed Collitts Inn at Hartley Vale. 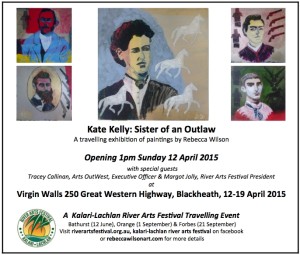 Rebecca is launching the first “Travelling Pop Up Art Exhibition” of her painted exhibition “Kate Kelly: Sister of an Outlaw”.

It’s a  Lachlan-Kalari River Arts Festival Event, the first of it’s kind.  Echoing the trail of Central West pioneers, the exhibition will “POP UP” in Blackheath, Bathurst & Orange making it’s way to Forbes in the lead up to the biennial River Arts Festival.

The exhibition will launch at the vibrant new Pop-Up space “Virgin Walls” 250 Great Western Highway, Blackheath on Sunday 12 April 2015 where it will show for one week only.

The exhibition will appear at Bathurst’s Wholefood Café in June, in Orange at the TAFE March St Campus from 1 September and in Forbes at Mezzanine Café from 21 September-31 October.  The River Arts Festival has events & exhibitions around Forbes from 30-31 October.

Rebecca grew up in Forbes, where Kate Kelly spent the last years of her life and it was Rebecca’s ancestor relatives who gave Kate Kelly, then known under the alias Ada Hennessey, her first job as a domestic servant at Cadow Station.

Kate married William “Bricky” Foster in Forbes when she was pregnant with their first child.  Her life was filled with tragedy & extraordinary events and she became a celebrity after her infamous brother Ned Kelly had hanged. Kate, an excellent horsewoman had ridden as a decoy for the Kelly gang and was known for delivering supplies while the gang was hiding out, even taking a bullet.

After the gang’s demise she travelled with her brother Jim performing on horseback and exhibiting weapons and other Kelly objects, until she went to Cadow Station to escape it all.  Kate’s life ended in tragedy when she was found dead in the lake about a week after she had been reported missing.  Kate’s brother Jim collected the three remaining children (three others had died) and “Ma Kelly” raised her grandchildren.

It is well known that Pierce Collitts had many connections with bushrangers in his days at the Inn and it may well be the case that in fact the Collitts’ & descendants had more Kelly connections than is thought.

For many years Rebecca has researched the life and times of Kate Kelly and she has fond memories of her late uncle telling her stories of how lovely Kate was, as had been passed down to him by relatives.  Kate was an extraordinary woman in extraordinary circumstances and the artist felt compelled to thoroughly research Kate’s life and how it intertwined with Rebecca’s own family history.

The exhibition tells a visual story of events & folklore in Kate Kelly’s life, as researched & interpreted by the artist and includes a collection of portraits based on photos that the artist found along the way.  The full exhibition will be shown at the Kalari-Lachlan River Arts Festival in Forbes.

Our latest February newsletter is ready for reading. Check out Issue 28 for all the details from our recent Gathering, announcement of upcoming events and lots more. Previous issues of our newsletters are also available here. Click here to read them.