With no TV or internet (or even electricity until the 1960s!) the people of the district learned to make their own entertainment. Music and storytelling played an important part and these skills were handed down from one generation to another. The Royal Hall was generally the venue and the music was often provided by members of the Yates family.

At the 2017 Illawarra Folk Festival, folk historians and musicians Rob & Olya Willis (read more about them here) and Graham Seal performed a song that Rob had collected from Ebb Wren in Forbes some time ago.  Titled “Under Bald Hill” it is a simple catchy ditty warning one of the Chinese miners that if he was found shakin’ (old term for stealing) he would be seen off the goldfields. Bald Hill is a landmark in the Hill End goldfields and now the site of a lookout over town. The “crick” (creek) was one of the early sites where gold was located.

With the permission of the performers this performance was videoed and can be viewed here for your enjoyment.

The story rings true when we read that there were Chinese in the area. One can only surmise that it may have referred to the following:

On 9 October 1865, a Chinese miner Ah Lun was charged with the wilful murder of Nee Jack at Bald Hill Creek on 23 July. Evidence provided by other Chinese witnesses recorded that Nee Jack had lent his cousin, Ah Lun, some money and they often quarrelled about it. This led to a fight after which Nee Jack was found with five wounds to his body and he subsequently died. Ah Lun was tried and found guilty, being executed by hanging at Bathurst Gaol, where he was “ushered into eternity” on 21 November 1865.

Read the full story of this court case on Trove here. 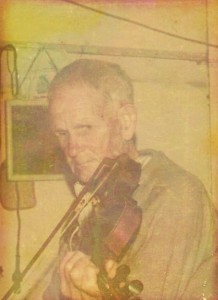 Joe Yates with his violin – from Coral Brann’ s collection

Joe Yates was a bush worker and well known poet and musician from the Sofala/Hill End area. He was renowned for playing his wonderful melodies, many of which had spanned three generations of the Yates family, at the colonial dances. His stories and music have been included in traditional Australian folk music collections and are preserved in the oral history and folklore collection at the National Library of Australia.

George Jnr and Emma arrived in Hill End during the gold rush and stayed in the area where they produced their own “band” of six boys and four girls, most of whom play musical instruments. Joe’s memory for music was incredible and well into his twilight years he was able to put tunes together and play with vitality.  He was also well known for his poetry and his dedication to the living bush. Joe passed away in 1987 but his contribution to Australian culture, history and the arts will live on.

Mike Martin, in his “Collected tunes from Joe Yates” has reproduced a number of his works and these have been recorded by the group Jindi. The following are some of these tunes which have been included in our webpage with the kind permission of Mike Martin.

08 All the blue bonnets are over the border

To purchase an MP3 download of the entire Jindi Plays Joe CD and listen to other works by Joe which have been recorded by Jason & Chloe Roweth  check out their website. Joe’s music is also included on their Battlers’ Ballads DVD. 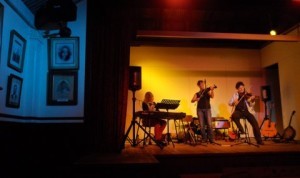 The ancestors keep a close eye on the performers…(HEATGG Archives)

In April, 2013 Cath Ovenden presented a concert of Joe Yates material in the Royal Hall in Hill. “It was a wonderful opportunity to be able to perform the music in the very place where Joe played all those years ago” she commented. Her CD, the “Fiddle Music of Joe Yates” was launched at the National Folk Festival in Canberra at Easter that year.

A sample of Cath’s work can be seen on YouTube.

Is it a song or a poem? There is some discussion about this, maybe it started life as a poem and was then put to music…

The following extract, based on Low’s article in issue 8 of Heritage Newsletter  briefly tells the story.

One of the characteristics of a ‘folk song’, whether or not its origins can be traced, is that it is adopted by the community (‘the folk’) and survives and evolves through the living memory of that community. The story of ‘Tambaroora Gold ‘provides an interesting demonstration of this process.

Was Harry Peckman’s broadsheet version the original? One can never be absolutely certain with folk song, even when authorship is claimed, however Low is inclined to think it is. There is no printing date on the broadsheet but Peckman went to Hartley in the early 1860s as a very young man to work for local hotelkeeper John Louis Meads. He was living in the Hartley – Mount Victoria district when Tambaroora, was still a prosperous gold mining town (along with its better known neighbour Hill End) and news and gossip from the gold fields was travelling regularly down the Western Road. It would appear that the young bush poet was performing his songs and poems and peddling his broadsheets quite widely during the 1860s and 1870s.

While no one could claim that Peckman was a great poet, his skills as a performer clearly made up for any deficiencies in craft. “No free verse for this poet”, observed cartoonist and journalist (and brother of Oswald Eyre of the Royal Hotel at Hill End) Hal Eyre in a series of articles in the Daily Telegraph, in September 1922 “but rhymes tuned to the beat of his horses’ hoofs.”

While we have Peckman’s complete text for ‘Tambaroora Gold’ we don’t know what tune he used when he originally sang the song in the 1860s. However, two fragmentary tunes collected by John Meredith were adapted by Manifold who suggested that both be used, one after the other.

Click on this link to listen to  “Five & a Zack”, a Melbourne group who recorded a version of this song in 1982, on a 45RPM single. They have given it a catchy tune and despite considerable searching we have been unable to contact the band to seek approval to share this recording. We hope they don’t mind if we do. If anyone can help us contact them, we are happy to hear from you so we can rectify this matter.

The band “Franklyn B. Paverty” then set it to the tune ‘Sweets of May’ when they recorded the song in 1987 on their album “Songs from the Australian Goldrush”. Listen to this version of “Tambaroora Gold” which has been made available with their permission.

Our latest August newsletter is ready for reading. Check out Issue 25 for all the details from our recent Gathering, announcement of upcoming events and lots more. Previous issues of our newsletters are also available here too
click here to read them