TO THE EDITOR OF THE HERALD.

Sir, Herewith I beg of you, for the information of the public at large, to insert these few lines.

Noticing in several newspapers so many accounts or reports from Hill End, and even telegrams, which are but founded on some very slight or unsafe foundation, or mistakes—who knows which—I feel it my duty as one of a large community to state a little about these so well blown-about gold-fields as Hill End.

I would advise no one to buy in any claim, lease, &c., without he is well acquainted with the party selling, or has some one responsible on the spot to refer to, or who the purchaser can depend upon; if not, he had better spend a few pounds, and look for himself.

Do not fancy that the whole of Hill End or Tambaroora are going to turn out to be rich or fortune claims. It has never been, and is not likely it will be the case, more so the way it goes ahead now, because a man need only go and take up a lease—never mind where—blow well, and misrepresent the same, and he can raise plenty of money never mind if it never turns out a grain of gold, it fetches money to Hill End. But how long? Not for many months, because the paying parties, not the sleeping share-holders, will get tired, and give their interests up, run the whole place down to be no good—and all because they were in a hurry in leaping without noticing how deep the pond may be; everything is represented in sunshine, and the whole cry is—if we only get the money to sink deep enough—who knows how deep? They might never be deep enough, and get broke before they get to the end of the shallow.

As many places as Trunkey, &c, have fallen to the ground through going too hot to work, our Hill End and Tambaroora, I am afraid, will do the same to a great extent through being forced into the public; it will stand for years on its own merits if left to the same, and I hope that speculators who might lose some money at Hill End will not complain, as they have been sufficiently warned. Several claims are really rich, but how far the richness runs along no one can tell, and where it is to be found no one knows. The oldest digger knows no more than a new chum in regard to where the gold is in the ground.

I saw a man who left Hill End on Thursday, this morning, and he, besides a telegram from same place, which I received yesterday at dinner time, stated to me that no new heavy finds have been unearthed at the so well-known Hill End as reported this week. Hoping my statement will not be considered out of call.

I remain yours obediently, 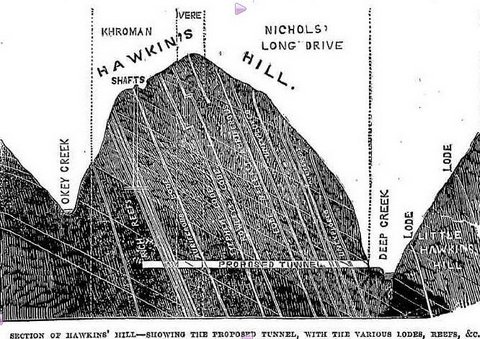 The Australian Dictionary of Biography tells us that when copies of the paper arrived at Hill End, some residents were so enraged, on reading his letter, that Holtermann was burnt in effigy.