(From the Hill End and Tambaroora Times) Hill End

— Late on Saturday night Hurley and Moore’s crushing was crushed at Chappell’s engine, giving another, magnificent cake of 2870 ozs. obtained from 100 tons, or an average of 27 ozs. to the ton, from which it will be seen that the claim is not yet worked out. Mrs Beard’s claim has, I believe, reverted to its original owners to their great satisfaction. The crushing just finished would have paid 20 per cent in the capital, and I doubt not that in twelve months the whole would have been repaid, having enough behind to pay dividends for years to come. An offer of £20,000 cash has been refused for the ground, and another lately of £18,000, Mrs. Beard remarking that she would not take that for her half now. 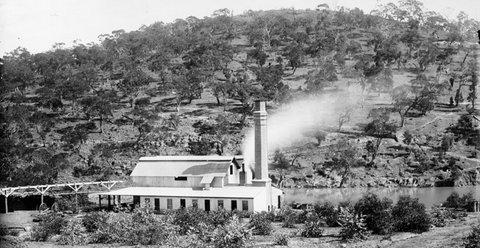 The Scandinavian claim is rapidly progressing with its shaft. One of the old whim sheds has just been removed, and Mr. Pullen is getting impatient at the delay in erecting his engine. A lease has lately been taken up on a by blow running through Mr Pullen’s engine site, and operations were commenced for sinking a shaft to the east of the engine and the north of the centre dam, but the Commissioner put an end to the war, on the ground that it was interfering with town property. From this I suppose it was fair to infer that we shall be left in possession of our streets and houses and not be given up a prey to the thirst for gold. In the Amalgamated the work of erecting a whim on the mine shaft is being rapidly proceeded with. It is be regretted that this was not done before, as it will be remembered that when the work was discontinued both slate and quartz were of the best description, and it was expected that Paxton’s vein would be cut in a few feet.

The Niagara continues to raise good stone, and bids fair to become numbered amongst the famous. The Frenchman’s is in the market, and I am told that they hope, in their prospects to cut Paxton’s rich vein in another 50 feet. I hope so too. The Great Western is about to commence in earnest, now that it is formed into a company, and there is every reason to expect a high future for this mine. It stands on the direct line, and should it not turn out well theorists will have to rack their brains for some solution of the difficulty.Tenders have been accepted for the erection of a whim in this claim similar in every respect to Rapp’s, and also for timbering the shaft.

Tippet’s Knight’s, and Crabbe’s continue the race with unabated zeal for the yellow metal, and we hope their industry may not go, unrewarded. The Crown Prince, late Renateau, Rapp, and Co.’s is being worked with great vigour. Three shafts are in progress on the claim:— First that last worked by the original holders on Stephen’s vein, which has been cut down, timbered, centred and awaits only the erection of a whim to get into full work; second, an old shaft in Rowley’s vein from which a rich patch was got in early times, but which was given up on the ground coming in very hard. This Rowley’s claim has turned out a lot of gold, how much no one knows, as the stone being gotten was not crushed. At a depth of about 130 feet it seems to have been thrown out, as it underlays nearly horizontally. It is along this horizontal piece that driving is now going on: a third, a shaft just commenced on the Frenchman’s vein; a short drive was put in from the road to cut it, and is now being sunk on. There are two veins on the shaft, which is not yet deep enough for any great results.