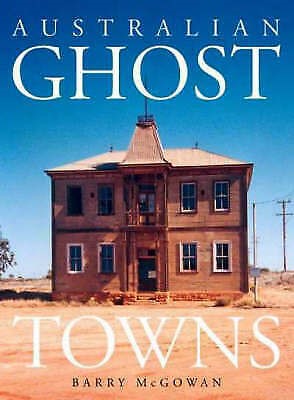 Australian history and Australian landscapes are littered with the half-buried remains of once-thriving towns that faltered under the onslaught of mine yields that declined, industry that failed, and penal colonies that ended. This extensively researched book delves into the history of these towns, from Port Douglas to Port Arthur. Hill End is not included – it is still a living town.

Australian history and landscape are littered with the half buried remains of towns that once thrived. Tumbledown ruins silent streets and empty windows remain as testaments to the pioneering spirit of a bold settler. A spirit that sometimes faltered under the onslaught of changed circumstances. Some towns today are little more than rubble, while others have struggled on a shadow of their former selves but determined to rebuild.

Australian Ghost Towns is the remarkable result of months of travel and field work. Barry McGowan’s extensive research delves into the stories of over 90 ghost towns nationwide – each rich with the memories of turmoil, perseverance, resistance, and dogged optimism. Lavishly illustrated throughout with both original and historical photographs, this essential reading provides a benchmark reference for a topic of enduring interest and significance.