The Women of the goldfields, their lives and stories. 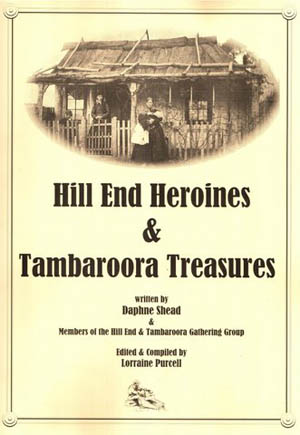 The number of books written about the once great gold mining towns of Hill End & Tambaroora can almost be counted on the fingers of one hand. Hill End Heroines and Tambaroora Treasures was the latest addition to this exclusive market in 2010.

Launched in Women’s History Month, this volume remains a timely reminder that writing women’s history is a worthwhile endeavour. These stories tell us so much and paint pictures of Australian life on the goldfields of the Central West of New South Wales.

In this inspiring anthology of mothers, daughters, granddaughters, families, and homes Daphne Shead weaves together a valuable narrative on women’s lives. It reveals a rich and compelling story of their journeys and their struggles in the mid 19th century.

“I was inspired by the tales that I had heard from the descendants of these families.” said author and family historian, Daphne Shead.  “I take my hat off to them all. What surprised me most was the loyalty and strength of character shown by these women who left their homes to accompany their menfolk, to venture into the unknown.”

Members of the Hill End & Tambaroora Gathering Group have complimented her narrative with their own stories that have been handed down within their family circles or researched from original sources.

On reading the book Councillor Moore from Bathurst Regional Council was amazed to learn of the lifestyle of these pioneers. “Wow, what those women had to put up with!!!” was her comment.

Throughout the book the reader is presented with family photographs as well as sketches by local Hill End artist Monique Erismann who was commissioned to illustrate the text. Rex Backhaus-Smith also provided a number of graphics from his publication “Into the Golden West” (published in 1979).

The book also contains a comprehensive index of names of people mentioned in the stories as well as information about the contributors so that further contact can be made by family historians.

A small collection of original recipes is included for the gastronomically inclined…or just the curious.

This book is now Out of Print however copies may appear on the secondhand book market.