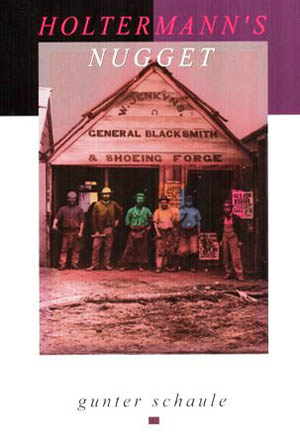 Although originally released in 2000 this publication was not widely distributed back then and we have recently been able to obtain copies of this book for sale to our members at a very reasonable price.

Written with the approval of Holtermann’s great grandson, John, I emphasise that this is a work of fiction. However it has been well researched and the background information paints a vivid picture of what conditions existed and what life was like in Hill End in the 1870s.

If you are looking for a good yarn and yet still interested in a slice of Australian history then this book is ideal for you.

Briefly, when mining magnate, pioneer photographer and public benefactor, Bernhardt Holtermann died prematurely at the height of his success, the speculation and rumours started. Some who knew Bernhardt closely had guessed the true nature of his relationship with Victoria, his children’s beautiful governess. They enjoyed the lavish parties and genteel soirées given by Harriet – Mrs Holtermann, but some believed they detected an edge of tension under the formal cordiality between herself and Bernhardt. Had she tired of being patient with her husband’s attentions to Victoria, or had Victoria tired of waiting for the divorce which would release her lover to become her husband?

Holtermann’s Nugget is an historical novel based on the life of the successful 19th century miner and businessman, the pioneer photographer, Bernhardt Holtermann. Bernhardt came to Sydney as a young man, to avoid conscription and the restrictive life of Hamburg in the 1850s. Having made his fortune in gold mining at Hill End, Holtermann became famous as one of the most successful businessmen in Sydney during the early 1880s. His tireless drive for building his new country and showing Australia off to the world with magnificent panoramic photographs took him to international trade fairs in Philadelphia and Paris. Bernhardt’s untimely death on his 47th birthday adds romance and intrigue to this novel of an adventurous life. Holtermann’s main bequest to the nation are his magnificent photographs which won for him international acclaim, and for Australia, international recognition.

This book is available in hard copy from the Gathering Group – $10 plus postage – Please use our order form.

It is also available on Amazon as an eBook for your Kindle. Here is the link: