A record of our ancestors who lived and worked in the area from early days until 1920. Compiled by Lorraine Purcell with assistance form Bill & Betty Maris and members of the Hill End & Tambaroora Gathering Group. (2006) 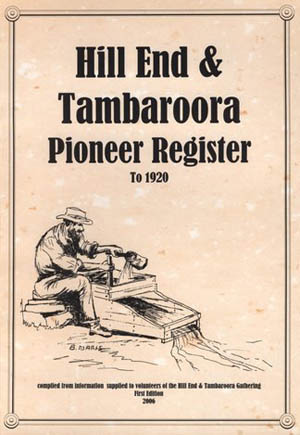 This original hard copy version sold out within 12 months of publication.

It can now be delivered electronically to your inbox as a PDF file. It has the added advantage of being keyword searchable.

Three years in the making, this Pioneer Register is an essential resource for those researching their family history in the Hill End & Tambaroora district, located between Bathurst and Mudgee in the central west of New South Wales.

So many Australian have their roots in this area, which was once the largest inland centre in NSW. By the end of 1872 the town boasted 8000 residents, a mile of shops and 27 hotels. The came, they worked, they played and some even made their fortune, whilst others left destitute. From here they moved on to all parts of the continent.

Multiculturalism was at its height. Gold knew no racial boundaries and there was a mix of English, Irish, Scottish, Welsh, Cornish, American, Swiss, German, Polish, Greek and Chinese to name a few. These nationalities are all represented.

Submissions were collected from descendants under the auspices of the Hill End Gathering between 2003 & 2005. The volume also includes a spouse index, which helps in finding of the correct family entry. There is also brief information about Hill End and Tambaroora Churches as well as hints on researching the families. A special inclusion is a list of family photos, many not seen anywhere else, which are on display in the Royal Hotel Hall in Hill End as a tribute to these early pioneers. To assist family history researchers there are also contact details of over 250 contributors.

“This timely publication has its origins in the unique social and community cohesion of successive generations of residents of the Hill End and Tambaroora district…..

It honours and commemorates those who followed the rough and inhospitable paths to the Tambaroora goldfields following the discovery of alluvial gold there in 1851, and those enterprising individuals who, in 1860, reached Hawkins Hill, and, by 1870, Hill End, where more than 120 companies were actively engaged in exploiting the main reef mines. Their stories, and those who succeeded them, are the inspiration for this book.”