The Golden South: a history of the Araluen, Bell’s Creek and Major’s Creek gold fields

The Golden South: a history of the Araluen, Bell’s Creek and Major’s Creek gold fields 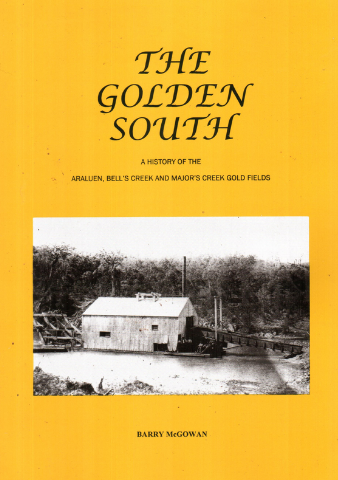 The Golden South is a history of the Araluen, Bell’s Creek and Major’s Creek gold fields in southern New South Wales. It is the fourth in a series of books on mining communities in this region published by the author.

The book is based on an environmental and heritage overview of the gold fields in the Araluen catchment area. Completed in 1998. one chapter has been devoted to heritage and environmental considerations.

Araluen was for many years one of the leading gold fields in New South Wales. With a few notable exceptions, however, the significance of these three fields has escaped the notice of most historians. Almost all the gullies and creeks on the three fields, including the whole of Araluen Creek, Major’s Creek and Bell’s Creek, and a large part of the Deua River, were mined. The book attempts to capture this ebb and flow of activity, and the rise and fall of the mining communities.

Barry McGowan has wide experience in the interpretation and recording of historic mining sites, both in New South Wales and Victoria.