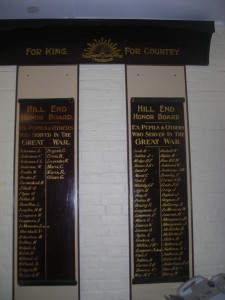 Hill End, like so many other small country towns was deeply affected by the Great War. The young men who had grown up in the village knew where their duty lay and so, many of them enlisted in the services. Within the first year they were also joined by Nurse Alice LeMessurier.

As the Centenary of Anzac Day draws closer we are again thinking of these soldiers and the nurse who spent their formative years in the village or surrounding district. We know their names and now we would like to know more about them so that future generations can also be aware of their contribution. To honour their memory the Hill End & Tambaroora Gathering Group is compiling a publication in time for that Centenary in 2015 which will record the lives and military records of those named on the roll.

Researcher Helen Wood has undertaken the task of researching these WW1 soldiers and has already accessed their war records at the National Archives; however, additional photographs, memorabilia and any further stories about them are being sought from family members so that the information is there for the future.

We would also like to know about any other WW1 soldiers who grew up in the Hill End and Tambaroora area whose names may have not made it to the Honour Roll as they enlisted elsewhere, so that they may now be included in our records. As time draws on much of this first hand knowledge is lost and it is our duty now to record what we can.

The following names have been recorded on the Roll.