According to Harry Hodge, the northern part of Tambaroora, past Chinatown and up to the Ullamalla turn-off was known as “Greektown” because families from Greece and the Ionian Islands developed a little community here. This small group of shanties housed around 20 Greek families and it has been claimed in a number of documents that it was probably the first gathering of Greek settlers in Australia.

There were also difficulties in identifying early Greek settlers, as most of them were illit­erate, even in Greek. They tended to anglicize their names, as officials and others could not understand the unfamiliar Greek names. This usually resulted in a shorter version of the name which sounded more English, or an entirely new English name instead. 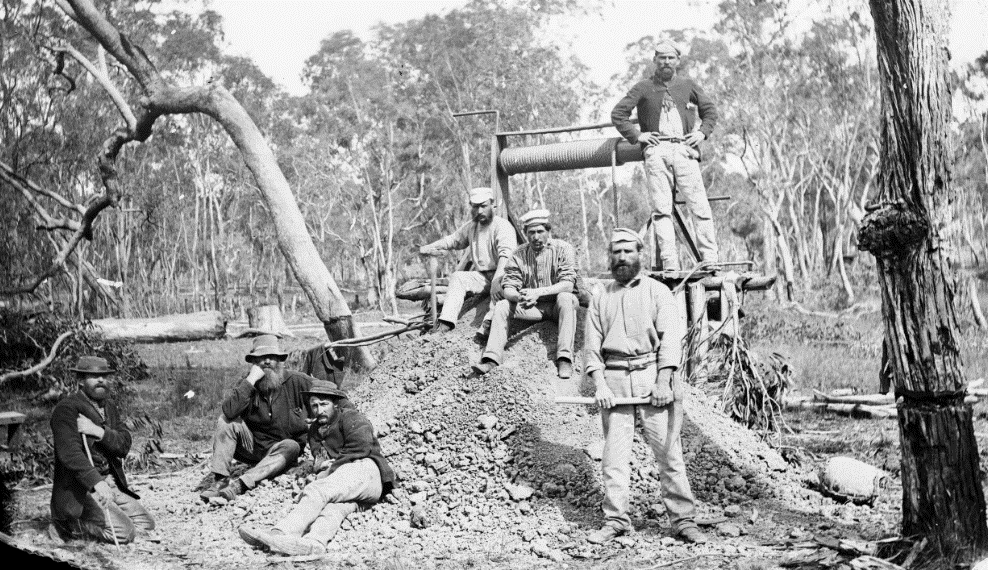 Gold miners and a mine head, Gulgong area or Hill End (?) in the centre, with black beard, is Gerasimos Vasilakis, known as Jeremiah Williams, (great grandfather of N. Longmore), who came from the Ionian Islands
ON 4 Box 5 No 18472 Digital order no: a2822394 State Library of NSW

A number of the Greek miners married local girls, many of them English or Irish and still in their teens.

Most of these families moved on when the gold started to peter out. Names such as Manolato, Macryannis, Doicos and Totolos were well-known then, but now all the houses are gone and only a few gnarled fruit trees, long past bearing, remain.

The following is a list of Greek names associated with the district, showing the alternative spellings that have appeared on various records:

Further research on the Greek miners:

Hugh Gilchrist “Australians and Greeks: The Early Years – Vol. 1. An index of 835 names of early Greek immigrants to Australia from this book has been posted on the Hellenic Genealogy Geek blog. This includes a number of names associated with Tambaroora.

Hugh Gilchrist – The Greek Connection in the Nineteenth Century on the the Kythera-Family.net website

The Greek Hellenic Genealogy Geek Facebook page may also be able to assist in linking up with these families.